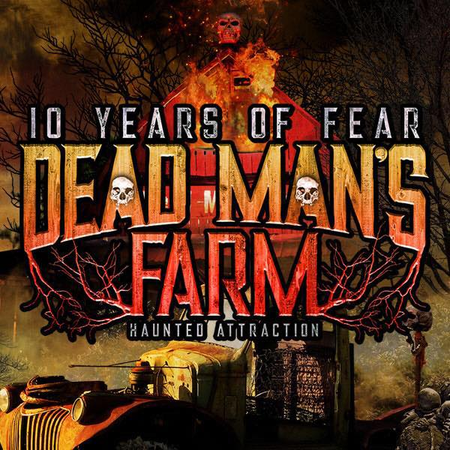 Home
About
Get There
Tickets

We are your SCREAM destination this Fall!  Come visit one of the scariest and most intense haunted houses in the Southeast! We are a HIGH energy, HIGH intensity, Live Action Haunted House! Set on a real farm in East TN, we use undead actors, sounds, lighting and special effects, designed to test your limits, shock your senses and bring out your deepest fears! Dead Man's Farm is the only haunt in the area that is ACTUALLY HAUNTED!

In addition to our Haunted House, we have an electrifying mid-way area with multiple performances, side shows, concessions, bonfires and more. We promise hours of horror and excitement that you won't find anywhere else.

THE LEGEND OF DEAD MAN'S FARM

Dead Man's Farm was owned by The Bludgeon Family for many years.  The few people that can still remember say the family was very secluded; doing everything for themselves at the farm, raising their own crops, slaughtering their own meat and even performing medical and dental procedures on each other.

That is until they fell onto hard times.  Witnesses reported that they began experimenting with the crops, the farm animals and eventually the poor farm hands.  Some people believe that the Bludgeon family was using dark magic on the physical bodies and souls of their victims… while others believe they weren’t really human to begin with.

They twisted the land and the beasts into UNHOLY ABOMINATIONS in their attempt to make the farm more profitable.  Being unsuccessful in the end, the farm was foreclosed on.

What the police found was a gruesome scene of human corpses, animal parts and some unnatural creatures… but the Bludgeon family was never prosecuted.

Unfortunately, no witnesses survived to testify against any of the Bludgeon Family members. Some simply disappeared, others died around mysterious circumstances. Will You Survive Dead Man's Farm?

other events by this organization